In honor of the publication of The Nancy Book, by Joe Brainard (Siglio Press), the Tibor de Nagy Gallery will present an exhibition of selected works from Brainard’s Nancy series. From 1963 to 1978 Joe Brainard created over 100 works of art appropriating the classic comic book character Nancy.

The artist depicted Nancy in a variety of spaces and as an extensive cast of characters. The exhibition will include a selection from this series, including a suite of 20 works acquired by the Colby College Art Museum. Some of the works are sentimental, while some are clever and humorous, and others are irreverent and playful.

Brainard grew up in Tulsa, Oklahoma and moved to New York in 1960. He gained early recognition with his first solo exhibition in 1965. Over the next decade he exhibited regularly and his work was included in numerous museum exhibitions in the United States and abroad.

Brainard’s work was the subject of a traveling retrospective in 2001 that was presented at P.S. 1, Contemporary Art Center, in Long Island City and the Berkeley Art Museum. His drawings, collages, assemblages, and paintings are in the permanent collections of the Metropolitan Museum of Art, the Museum of Modern Art, and the Whitney Museum of American Art, among many others. Brainard died from complications of AIDS in 1994. 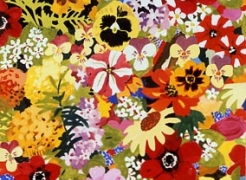