The Tibor de Nagy Gallery is pleased to present Oh, What Fun! an exhibition of John Ashbery's collages made from 2015 until his death in September 2017. This will be Ashbery’s fourth solo exhibition at the gallery and his first at the gallery’s Rivington Street location.

Oh, What Fun! consists of a group of works inspired, as with his previous collages, by Ashbery’s long held fascinations, many since childhood, with cartoons, movies and other forms of popular culture.  Much of the imagery and source material is culled from his personal trove of collections, such as board games, French puzzle plates, old postcards, and other treasured knickknacks that fill his homes in Manhattan and Hudson, New York.  Ashbery became interested at a young age in surrealism, particularly the collage novels of Max Ernst and the work of Kurt Schwitters and Joseph Cornell. A more direct and collaborative influence was his friend Joe Brainard, at times making collages side-by-side with him in Brainard’s house in Vermont and sharing found materials for future collages.  Although Ashbery started making collages as an undergraduate at Harvard, with one appearing on the cover of the Harvard Advocate in 1948 (a collaboration with Fred Amory), he first publicly exhibited a single collage in a group exhibition at the Drawing Center in 1977, it is only in the past decade that his collages have become more widely known.

John Ashbery is recognized as one of the most important American poets of modern times, and his approach to poetry and collage follows parallel tracks. Often in an Ashbery poem, the sentences and phrases accumulate into abstract “collages” that cannot easily be paraphrased or explained. This practice of incorporating collage elements into his poetry began as far back as 1952.  A more recent example of this creative process is the poem They Knew What They Wanted (link) composed of movie titles beginning with the word “They.”  Another earlier poem is Hoboken, published ca. 1953, subtitled (A collage made from Roget’s Thesaurus).  In the poem Daffy Duck in Hollywood (link), Ashbery pulls together many disparate elements into a loose narrative.  As fellow poet John Yau said in a recent interview with him: ''In some ways, your Manhattan apartment and Hudson house are like the list in Daffy Duck in Hollywood, full of all kinds of things next to each other.” To which Ashbery answers: “Yes, I’m firmly eclectic in these and in most things.”

The exhibition also celebrates the poet’s long association with the gallery and marks the 65th anniversary of the publication of Ashbery’s first volume of poetry Turandot and Other Poems, which was published by the gallery’s Tibor de Nagy Editions in 1953.

Concurrent with the gallery’s show is a major exhibition of Ashbery’s collages at the Pratt Institute's Manhattan Gallery (link) titled John Ashbery: The Construction of Fiction, which opens on September 20, and runs until November 14, 2018. This will be the most comprehensive exhibition of the poet’s visual art to date, spanning seven decades of work and presenting over 120 collages and archival material. The exhibition is curated by Antonio Sergio Bessa, Director of Curatorial Programs at the Bronx Museum of the Arts.  Bessa, who co-organized the recent Martin Wong exhibition at the Bronx Museum and the Gordon Matta-Clark exhibition at the Jeu de Paume, Paris, is a scholar of concrete and visual poetry and a translator of Brazilian poetry. A fully illustrated catalogue will accompany the exhibition.

A  book on John Ashbery’s collages and poetry was recently published by Rizzoli/Electa – John Ashbery: They Knew What They Wanted, Poems and Collages, edited by Mark Polizzotti, with an introduction and interview by John Yau.

John Ashbery (1927-2017) had more than thirty collections published in his lifetime. His Self-Portrait in a Convex Mirror (1975) won the three major American prizes – the Pulitzer, the National Book Award, and the National Book Critics Circle Award. He served as executive editor of Art News and as an art critic for New York magazine and Newsweek. He was a member of the American Academy of Arts and Letters and the American Academy of Arts and Sciences, he was a chancellor of the Academy of American Poets from 1988 to 1999.  He received two Guggenheim Fellowships and was a MacArthur Fellow from 1985 through 1990. In 2012, Ashbery was awarded a National Humanities Medal by President Obama. 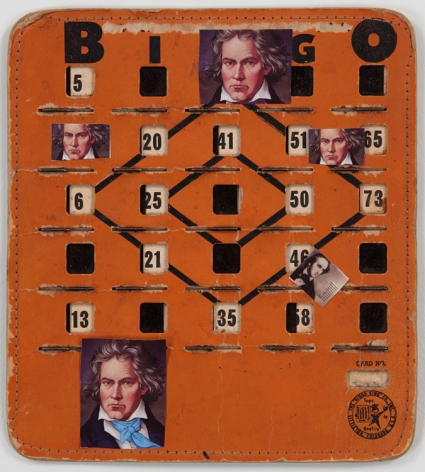 After the death of the artist and poet Joe Brainard in 1994, his friend, the poet John Ashbery, recovered an envelope of paper cuttings Brainard had collected for use in collages. The envelope was a posthumous message for Ashbery and reminded him of the collages he had made while spending time with Brainard and the poet James Schuyler in the 1970s. For Ashbery, who died in September 2017, the envelope was a fond reminder of his friend and signaled a return to his work as a collagist.

”Why Famous American Poet John Ashbery Made Hundreds of Collages

In his 1975 masterwork Self-Portrait in a Convex Mirror, the late American poet John Ashbery (1927–2017) meditates on Francesco Parmigianino’s painting of the same name. The emotional intimacy of the Renaissance artist’s sensitive, tender-hearted portrait captured Ashbery’s imagination: “The soul establishes itself. / But how far can it swim out through the eyes / And still return safely to its nest?” 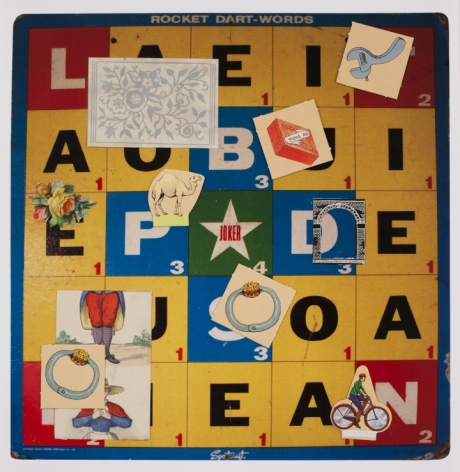 Ashbery’s primary subject matter concerns an alternate world where nothing goes permanently wrong, and where disasters are nothing more than pranks 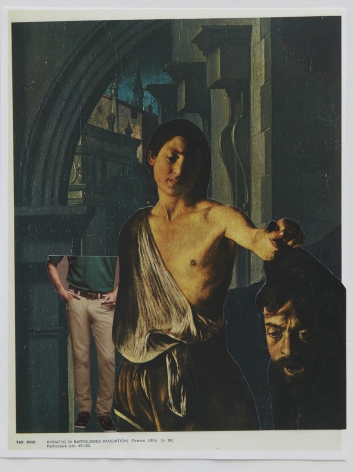 Art in America - Whispers out of Time by Josh Scheiderman