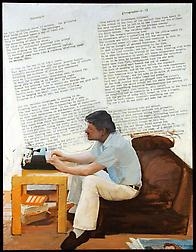 When Art Dallied With Poetry on 53rd Street
By Holland Cotter
January 22, 2010

I don’t believe in golden ages, but I do believe in golden moments. Culturally speaking, New York City has had its share, and one began at the end of 1950 when Tibor de Nagy Gallery opened on 53rd Street near Third Avenue in Manhattan.

To the casual passer-by the undertaking couldn’t have looked auspicious. The gallery was in a dumpy tenement several blocks from the glamorous art hub of 57th Street and Fifth Avenue. Most of its artists were young unknowns. And who was Tibor de Nagy? A refugee banker from Hungary with a fancy pedigree but little cash, and a single New York accomplishment: he was a founder — along with a bulky, Buffalo-born leprechaun of a puppeteer and art fanatic named John Bernard Myers — of a children’s marionette theater.
The new gallery with his name had other curious features. It was showing modest portraits and still lifes at a time when abstract painting, the bigger the better, was considered the advanced style. It had female artists on its roster, quite a few. Most eccentrically, the owners, de Nagy (pronounced de NAHJ) and Myers, seemed as interested in new poetry as they were in new art, and were producing a line of books combining the two.
As odd as the package was, it worked. Almost instantly, in the still-small New York art world, Tibor de Nagy’s openings were a smart place to be, and its artists and writers — Larry Rivers, Grace Hartigan, Frank O’Hara — were figures to spot around town. The gallery had arrived.

Six decades later, in a different location and with different personnel, it’s still around to tell the tale. And that’s what it’s doing in a tangy New York moment of an anniversary show called “Tibor de Nagy Painters & Poets.”
In retrospect, that the gallery’s debut was successful is really no surprise. De Nagy and Myers had plenty of help. After their marionette theater went bust — the polio panic kept audiences away — they wanted to start a gallery, and Myers, a born networker, found a backer in a British-born artist and amateur botanist named Dwight Ripley. Ripley had been angling for a solo show of his drawings with Betty Parsons, an established 57th Street dealer, and when she said no, he offered to bankroll de Nagy and Myers in what he hoped would be a rival gallery.

Then they had another bit of luck. Ripley was pals with the critic Clement Greenberg and persuaded him to supply Nagy and Myers with a list of new-talent artists to contact.
Hartigan, Rivers, Alfred Leslie and Helen Frankenthaler were some of the names on the list, and were quickly signed up. Willem de Kooning put in a plug for Fairfield Porter, and other connections soon fell into place.

Rivers, for example, introduced Jane Freilicher, a recent convert from abstraction to still life and landscape painting, to the gallery, along with the magnetic O’Hara, who had a menial job at the Museum of Modern Art but was clearly on the ascent. O’Hara, in turn, brought in the poets John Ashbery and Kenneth Koch — the three had overlapped at Harvard — and eventually attracted a legion of young disciples, including Bill Berkson, Barbara Guest and Ron Padgett, to the scene.

And a scene it was: amorous, rivalrous and incestuous; at once an avant-garde and — much like the New York art world at present — an avant-garde in reverse. Poetry was pushing into prickly new territory, while art was revisiting old ground, although with some new moves. What made the situation at Tibor de Nagy distinctive was that almost everyone was collaborating, artists and poets alike.

Remember the context. This was the high moment of Abstract Expressionism, with its image of the heroic artist battling his way alone toward some existential sublime. Set that image against another: O’Hara and Rivers, lovers at the time, sitting knee to knee as they worked on a series of jointly made lithographs, each adding drawings, jokes, notes to friends and poems like valentines.

Or consider the poetry books coming out under the Tibor de Nagy imprint, among them Mr. Ashbery’s first collection, with drawings by Ms. Freilicher, and O’Hara’s 1953 “Oranges,” with hand-painted covers by Hartigan. These weren’t weighty tomes. They were pretty pamphlets, so thin and fragile as to be all but invisible on a library shelf.
To get a sense of the anti-heroic spirit actively encouraged at the gallery under Myers’s auspices, take a peek at the two zany films by Rudy Burckhardt in the show. The shorter one, “Mounting Tension,” from 1950, casts Rivers as a lecherous painter, Ms. Freilicher as his vampy shrink, and Mr. Ashbery as a touchy-feely jock (he’s touching and feeling sculptures at MoMA) in a send-up of the psychic angst Abstract Expressionism held dear.
In the more polemical second film, “Money,” the poet and critic Edwin Denby — Burckhardt’s longtime lover — gives a bravura performance as a cash-crazed tycoon, and the artists Alex Katz and Red Grooms, along with Myers, play corporate thugs in a boardroom.

“Money” dates from 1968, well after the rise of Pop, by which time contemporary art, long a coterie interest, had become a high-powered commercial enterprise. What we’re basically seeing in this film is evidence of one golden art moment giving way to another. Tibor de Nagy painters didn’t do Pop, though some served as a bridge to it: Rivers with his brushy skewerings of history painting; Hartigan with her big-stroked takes on advertising. In any case, the gallery under Myers didn’t make the transition.
Many of its painters had hit their peak in the 1950s, leveling off or declining thereafter. Myers himself left in 1970 to do other things; he died in 1987. De Nagy, who died in 1993, passed the gallery on to its present owners, Andrew Arnot and Eric Brown, who assembled the anniversary show.

They’ve made judicious choices. There are a few starry items, like Ms. Freilicher’s 1954 still-life “The Painting Table,” a jumble of jars, cans, tubes and brushes, owned by Mr. Ashbery and reproduced on the cover of his book of collected art criticism. There’s plenty of inner-circle portraiture: Nell Blaine’s painting of Ms. Freilicher, Porter’s of James Schuyler and so on.

O’Hara is a big presence. In a 1960 photograph by Fred W. McDarrah we see him leaving MoMA dressed like a banker. And in an invaluable television documentary from 1966, the year he died, we hear him read his poetry.

A good amount of material is archival, visually low key but fascinating. And there’s work by a few artists we rarely see. One is the gallery’s original backer, Dwight Ripley (1908-73), represented by two small, fanciful drawings. Myers gave him five solos, but the last was in 1962, and he was all but forgotten until 2004 when the poet Douglas Crase published a superb biography called “Both: A Portrait in Two Parts,” and followed it with a exhibition at Poet’s House.

Maybe Mr. Arnot and Mr. Brown will return this fine-grained and elusive artist to view, as they have Joe Brainard (1941-94) over the past decade. With Brainard it’s almost impossible to make fast distinctions between poetry and art. His three collages in the show are collaborations with O’Hara, but his solo work, with its mix of image and word, is a form of self-collaboration, a witty, exquisitely phrased interior conversation.
If the early poetry that Tibor de Nagy published was more adventurous by far than the art that the gallery showed, and left a richer legacy, it was the friction of their meeting that made this moment glow. Whatever happened to that meeting, or rather to the idea of it? Did art get too public and poetry stay too private? Could the digital realm be a place for reconciliation? Or is the very question the stuff of yesteryear? I’d really like to know. Meanwhile there’s this show.