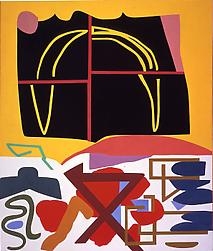 GOINGS ON ABOUT TOWN

The octogenarian, who studied painting in New York in the mid-nineteen-forties, has lived in France since 1949. No surprise, then, if her bright geometric abstractions put you in mind of another American in Paris: Stuart Davis. Some of the works in this exuberant forty-year survey seem to lift modern-design motifs from Madison Avenue; all of them flatten linear forms in playful compositions that look both carefully considered and utterly spontaneous. Through April 24. (De Nagy, 724 Fifth Ave., at 57th St. 212-262-5050.)