Construction Worker with a Crane

Tibor de Nagy is pleased to present Manhattan Pastoral, an exhibition of color photographs by Louis Stettner. This will be Stettner’s first exhibition at the gallery and first in New York since 2009.  Stettner was born in Brooklyn in 1922, he first traveled to Paris in the 1950s and spent decades thereafter traveling back and forth between Paris and New York, cities he called his “two loves.”  He died in Saint-Ouen, France, in 2016.

For our inaugural exhibition of Louis Stettner, we are presenting Manhattan Pastoral, color photography shot in New York from 1998 to 2014.  Stettner only took up color photography, along with painting, in the early 1990’s. He was particularly drawn to the Cibachrome process for its rich colors.  The works in the exhibition were all shot on his annual summer visits to New York City, mostly in and around Times Square.  When in New York, Stettner began each day walking the streets.  He called this series Manhattan Pastoral because he sought out the less gentrified parts of Times Square, west of Ninth Avenue, where he could still find regular New Yorkers against the backdrop of the city’s architecture, both vernacular and iconic, and in an ever process of change.

From the beginning of his career as a photographer, Stettner was drawn to everyday people and he particularly pursued the subject of people at work.  He did this as a point of view and as a political act. Conversely and as a counterpoint, he also often portrayed people at rest, or on their commute home – as in the Penn Station series from 1958 and his initial Subway photographs from 1946.  Stettner honed his vision from two traditions, American “street photography” and the French tradition of humanist photography.  When, later in life, he turned to color photography, much of his format and mission remained.

Louis Stettner had an over seven decade career.  He acquired his first camera, a wooden view camera, as a teenager. In the late 1930s he joined the Photo League, a group of socially conscious photographers, where he met and befriended Weegee. Stettner served as a combat photographer in the Pacific during WWII. Shortly after the war, he traveled to Paris for a trip that turned into a five year stay. In Paris, he studied photography at the Institute for Advanced Cinematic Studies and became a close friend of Brassaï, and was deeply influenced by him as well as other French photographers, with their poetic and romantic style of portraying everyday life.

In 2016 Stettner was treated to a retrospective at the Centre Pompidou, Paris; the exhibition Ici et Ailleurs was co-curated by Clément Chéroux and Julie Jones.  The San Francisco Museum of Modern Art will open a solo exhibition of Louis Stettner on October 27th.  Titled Traveling Light, the exhibition will present an overview of Stettner's most important series works. It is curated by Mr. Chéroux, now the Senior Curator Photography at SFMoma, and will remain on view until May 27, 2019.

Louis Stettner's work is in numerous museum collections including The Museum of Modern Art, The Metropolitan Museum of Art, The Art Institute of Chicago, and Los Angeles County Museum of Art. In 2017, the Whitney Museum of American Art added five additional Stettner photographs to its collection. 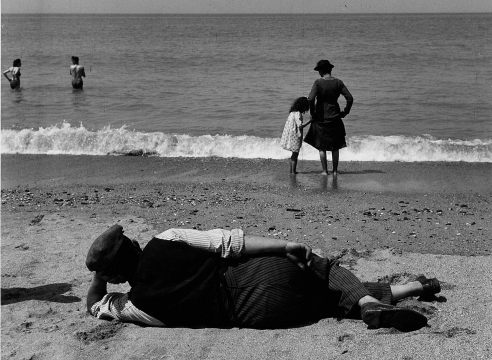